Jonathan is part of the Jockey Club’s broadcast team at Aintree and here he looks ahead to the big race and the supporting card in the company of Abi Sawyer.

Reflecting on a wonderful first day of action, including another Grade 1 win for jockey Lizzie Kelly and looking ahead to a superb second day of action, Jonathan joins the Jockey Club’s Abi Sawyer…

Tiger Roll completed a magnificent first day treble for trainer Gordon Elliott and a first Cheltenham winner on her first Festival ride for Lisa O’Neill, who stormed up the hill in tremendous style to win at 16/1. 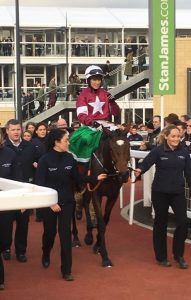 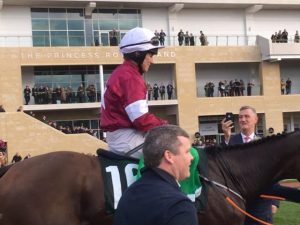 Afterwards, she spoke to Jonathan about her triumph…

Check out my attempt at the @betfair #commentarychallenge! -0033 from Betfair Commentary Challenge on Vimeo.

Like an old best friend, this race is one that we look forward to seeing time after time and this is the classiest ever renewal. Not even 2014 winner Pineau De Re can get a run, so high is the base rating (145), and among its rank are Many Clouds, successful 12 months ago, together with other Hennessy winners, King George VI and Betfair Chase winners, Festival scorers, former favourites for this event and this year’s handicap ‘good things’.

The term lottery has been associated with the contest since that horse won what has traditionally been accepted as the race’s first running in 1839. However, whereas for much of its history that has been more about contest between horse, rider and obstacles levelling the playing field, now with such an abundance of quality lining-up, there is barely a runner – if there is one at all – that you can confidently strike a line through on the card, making it a lottery of a very different kind.

Many Clouds is a great starting point for us. Last year’s winner did not have nearly as hard-a-race as many have in claiming the prize and he has been able to do what no other horse since Bindaree had managed, namely to win another race after his National. That augurs well for his chance of a repeat, in terms of his wellbeing, while his form coming into this is also very solid. His win at Kelso last time suggested that he retains all of his ability and the handicapper has given him an outstanding chance of being the first back-to-back winner since the great Red Rum. It is difficult to see him being out of the first four given a trouble-free round, but then the margins are so tight that he could run a blinder to finish ninth.

When you consider that Many Clouds has to give 2lbs to a dual King George VI Chase winner in Silviniaco Conti then his task looks a little tougher. The Paul Nicholls-trained 10-year-old will relish conditions and the flat track. While we know that he stays at least three miles in the classiest of contests, he still has to prove that he gets beyond that distance. The only real blot on his record has been his visits to Cheltenham, but he won’t have those undulations to deal with here. Dropped back in trip last time and with headgear on, he was still good enough to land a Grade 1 at Ascot, so pace will not be an issue and if he proves up to the task then he will be one of the more obvious winners.

Stablemate Wonderful Charm carries only 5lb less, does not look nearly as classy and also has stamina doubts to overcome. First Lieutenant was this scribe’s selection 12 months ago. This time around he carries 5lb more and, although in decent form, he made mistakes that day and got behind, suggesting that a triumphant return is unlikely.

Ballynagour has been a quality performer on his day, running to within four lengths of Cue Card at Wetherby in the Charlie Hall Chase, but then subsequently unable to build on that promise. He wouldn’t have been ideally suited by 2m 5f at Cheltenham last time and with conditions more to his liking here, he is well worth a try over this extreme distance.

O’Faolins Boy ran a nice race in the Gold Cup and will appreciate this slightly slower ground, while The Druids Nephew will be in the minds of many after travelling like a potential winner until falling five out last year. History has shown that horses don’t have to have won during the season of their Aintree success and he has again been laid out for this and looks fresh and ready.

Similarly, The Last Samuri, who finished 10 lengths clear of The Druids Nephew at Doncaster last month, is handled by former-winning trainer Kim Bailey and really does give the impression that this marathon will suit. The give will also be to his liking, but if you are trying to pick holes in his claim then at eight-years-old he is younger than the norm, while he has only had eight starts over fences where there has been an average of less than eight runners, so he has plenty to prove.

Holywell is a very interesting contender for 2010 winning trainer Jonjo O’Neill. Fourth in the Gold Cup last year and third in the Betfred Bowl, connections appear to have accepted that he was never going to be the champion staying chaser and this season his campaign looks to have been geared towards big spring handicap prizes. Of course there is none greater than this and although not the biggest of individuals, he jumps really well, acts well on good to soft ground, and he looks to have a better chance than many from a good mark of 153, the same pitch from which he found only one too good in a hot Festival handicap last time.

Shutthefrontdoor ran a cracker when sent off 6/1 favourite for the 2015 renewal but, while he stayed four miles, the run-in found him out. From 1lb lower there is no reason why he can’t be thereabouts once again but he does not line-up in as good form as he did last year. Soll burst a blood vessel when finishing ninth last year after leading about a mile from home. He is four times the price this year, but he is nigh-on a stone higher in the weights too, which will probably prove to be his undoing.

Boston Bob has long been contesting top class races and some early jumping problems appear to have been put behind him. With Ruby Walsh up anything is possible, though he will also be taking a trip into the unknown over this far. The ground won’t be a problem. The very lightly-raced Morning Assembly makes some each-way appeal given that conditions are to suit, he jumps well and the form of his Punchestown run with Don Cossack from a couple of seasons ago now reads very well. Nonetheless, he has 10 lengths to find with Holywell on Cheltenham running and again races from a mark 3lb lower than that rival.

Unioniste is 9lb lower than when a 16/1 fifth fence faller last year. Recently beaten 10 lengths by Many Clouds in their Kelso prep race, Paul Nicholls’ runner now receives a 10lb pull and a clear round would make him very interesting, although there is a slight concern that he does not seem to possess the pace that is needed to win this race these days. He and Le Reve are weighted to be closely matched on the latter’s Sandown win in February.

Gallant Oscar has got experience on his side and some very good soft ground form to his name, although his jumping does not always hold up under pressure and there will be plenty of that here. With only four chases to his name Onenightinvienna would have to be something special to land this, while Kruzhlinin has a bit to find with both Holywell and Morning Assembly on Festival form, although he would be a hugely popular winner with Richard Johnson up.

There have been worse 66/1 shots than Ballycasey, who is one of a quartet saddled by Willie Mullins. He was just 25/1 when being brought down early on last year and looks a relatively generous price given that he showed that he is still in good heart over a trip arguably too short at Cheltenham last time. Hadrian’s Approach is a similarly interesting outsider, racing from just 1lb higher than when landing the 3m 5f bet 365 Gold Cup at Sandown almost two years ago. He has clearly not been easy to train since then, having had only three runs. The latest of those, however, was an encouraging enough return from an absence of over a year when seventh in the Betbright Chase at Kempton. Good to soft ground would be ideal for him and he represents the ultimate trainer in terms of returning good horses to former glories in Nicky Henderson.

Vieux Lion Rouge ran in the four-miler at Cheltenham, where his stamina seemed to come up just short and Pendra is more interesting. Strictly speaking he has a few pounds to find with The Druid’s Nephew on last year’s form. In his favour, he has been very lightly campaigned but proved good enough to win a decent Ascot prize in the autumn and there is sufficient stamina on both sides of his pedigree to suggest that he might get this trip.

Last year’s runner-up Saint Are has to be shortlist material given that he has a 2lb pull for 1¾ lengths with Many Clouds. He is twice the price of Oliver Sherwood’s runner and proved his wellbeing with a Doncaster veterans’ chase win last time which should have him spot on, while the yard is also firing in the winners. The Romford Pele has not yet returned to the form he showed in 2014, but he put up a decent effort to be a 14-length third to Thistlecrack over hurdles at Cheltenham in January and stayed on pretty well over three miles in the Coral Cup last time to be beaten just over four lengths. He has not always been the most fluent of fencers, but from a very competitive mark he could be one of those who enjoys himself over these obstacles and he will be plugging on when others have cried enough.

It would be a truly magnificent feat for Many Clouds to win the race again and this fan will cheer him to the rafters if that is the case, but having been convinced that Comply Or Die would do the same a few years ago, history suggests that he will be chasing home at least one other horse. Holywell looks to have very strong claims, Saint Are is unlikely to be far away again, while Silviniaco Conti has an outstanding chance at the weights. If there is to be a longer-priced upset then it could come from Ballycasey, Hadrian’s Approach or The Romford Pele.

Back with a bang in 2016, this week we talk Cue Card, The Festival and Warwick’s Betfred Classic Chase. Jonathan Doidge talks to trainer Peter Niven.

Plus why is Matt so happy? Could it be anything to do with his increasing love for hot novice hurdler, Min?

Full commentary on a memorable 2015 King George VI Chase, including a thrilling finish between #CueCard and #Vautour.

A fabulous performance by Smad Place to win it at the second attempt. Here’s the full call…